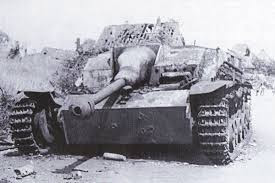 The game of the “5th Platoon” Arnhem Campaign for Chain of Command published in Issue 74 of Wargames, Soldiers and Strategy played this morning, concluded in a third straight defeat of the German forces. With only one more game to go and the moral rating of the Germans at worrisome low levels, I believe it will be difficult not to say impossible, to stopping the British in the final scenario.
The German players decided to use his first wild-car option and to launch a counterattack. This wild-car allows the Germans to roll "2d6+6" support points only for one scenario which together with the difference in rating between the German regular and the British paras elite, provided a good bag of additional forces.
As we were playing “Big CoC” in this campaign, we ended up with 40+ points, enabling to buy 4 infantry sections, 2 Jagdpanzers IV and a couple of 250/10 armoured vehicles (armed with a an MG and a 20mm gun).
Plenty of useful stuff but being regular not too many command dice to manage as effectively as one could wish all these forces; with the moral levels already low from the previous games, the risk of falling into the red area where you start losing additional command dice and jump-off points was already high... as it finally happened. 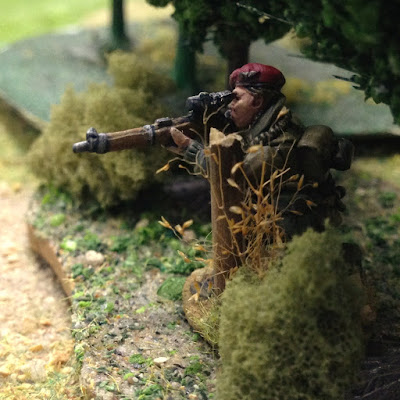 After concluding the patrol phase, the respective  lines of attack and jump-off points were as shown in the chart below. 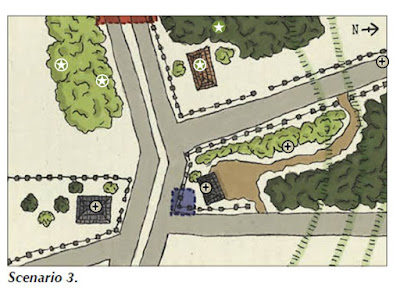 We failed our attempt to fix the main enemy forces in the front and outflank the British on our right: the enemy jump-off point in the forest in the top-right corner of the map was quite useful to reject our attacks in that direction. 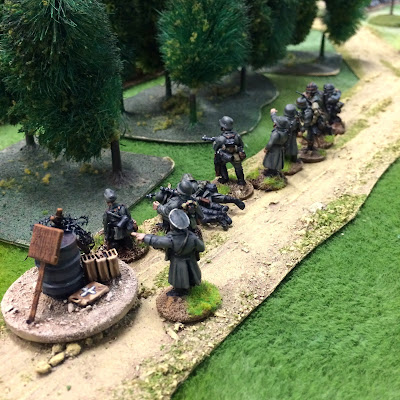 In fact, the German attack quickly bogged-down after a promising start. In the left of the German line, the key house on the left was fortified with an infantry section in overwatch looking to blow-up any British unit emerging from the woods; and a Jagdpanzer was brought in support; and the FOO was located in the house in the centre with a good view on the woods where the British had placed their jump off points. 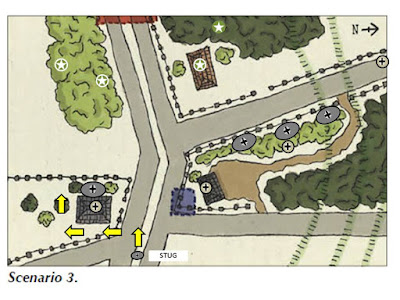 In the centre, 3 infantry sections were placed ready to cross the open space when circumstances were propitious; and in the right flank, strong armour gruppe would emerge at some point.
The British reacted occupying the woods facing our left flank and the house in the centre;  in the woods in our right saw a 6-pounder emerging together with a PIAT team which in a few phases took good care of our amour units. 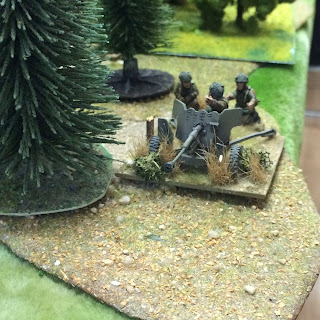 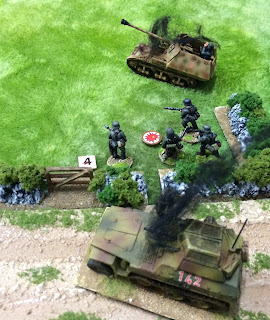 In our right the concentrated fire of 2 Para sections and a HMG liquidated the German infantry section in the house. My FOO could not act of time due to an early end of turn which forced me to  try to reactivate unsuccessfully. 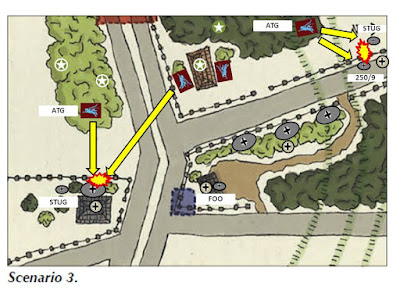 The loses in supports, teams and leader rapidly reflected in my Force Moral table sinking to 5 and later to 2  due to the losses inflicted to the other German platoon. A final attempt to attack with infantry was quickly put-off and the other German player then saw its force moral sinking to zero, triggering the end of the game with the third staright defeat.
It looks like the road to the Arnhem Bridge is now almost totally open and the fate of the Reich hinging in a final desperate attempt to stop the British in two weeks time. 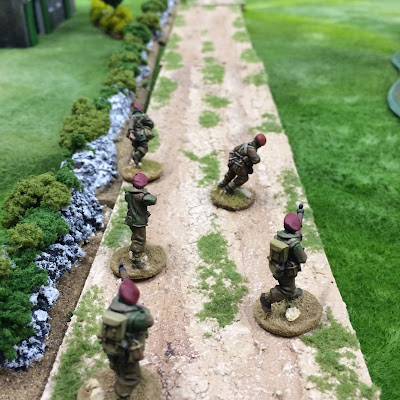