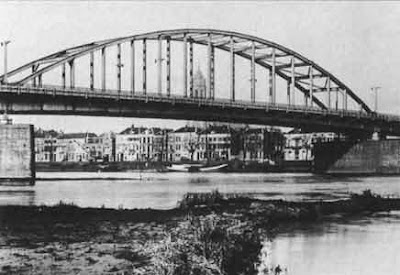 Fourth and final game of 5th Platoon, the Arnhem Campaign for Chain of Command published in issue 74 of Wargames,Soldiers & Strategy magazine. As expected, a straight win for the British, given the really bad state of the German forces after three consecutive lost games.

This final game was an “Attack on an objective” scenario of the main book, and the British had to take the crossroads in the east side of the map. The map shown only two ways to approach the crossroads:  north of the road, totally open flat terrain, likely to be a suicidal attack; south of the road, hopping from house to house until reaching the line of German defense… guess what route the British players chose. 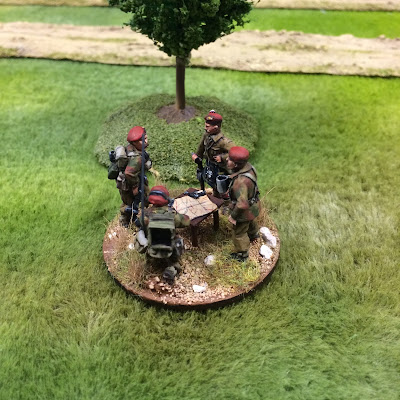 We (the Germans) selected infantry sections, trenches, a Stug and the off-board artillery option as supports. We decided to cover with one unit the house north of the road next to our starting line (just in case the British decided to use that flank) and try concentrating most of the forces in the area south of the road. The house in the north offered also a good vantage point for our FOO.

At the end of the patrol phase, the contenders lines were as illustrated in the map below. Note that we had 5 jump-off points as the objective was marked with an extra marker (also remember we play Big Chain of Command with 2 platoons per side). 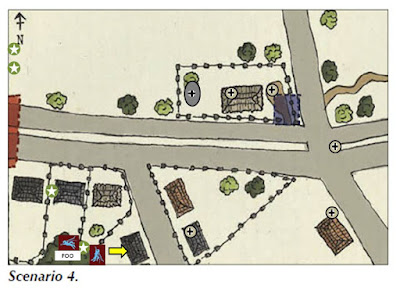 In the opening moves the British deployed their FOO and a sniper in the only woods available, covered by an infantry section nearby. We deployed an infantry section and the trenches in the house north of the road and another section in the south. The game saw a rapid buildup of British forces in the south (…as expected…) thanks to having 6 dice of activation and achieving several consecutive double turns. 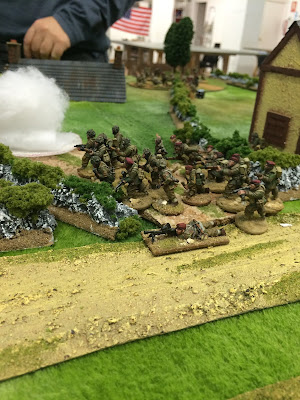 Our buildup was significantly slower (the British were using the barrage support option) and by the time we had some significant troops on the table, the house of the north was already under a heavy-mortar battery barrage and the troops were advancing under cover of smoke deployed by the British 2-inch mortars. 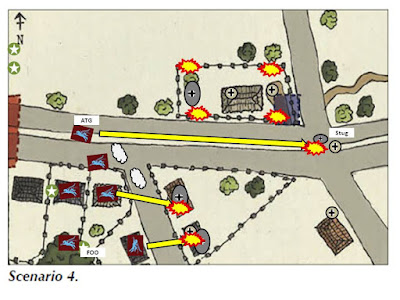 We tried to regain some balance deploying our armoured asset; but a 12-pounder emerged on the British side, achieving  5 hits out of 7 possible in the following activation phase, out of which we only saved one… KHA-BOUM!  The Stug blew out and we lost our final hope to win this game. 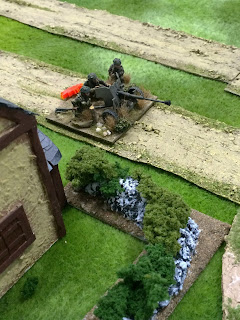 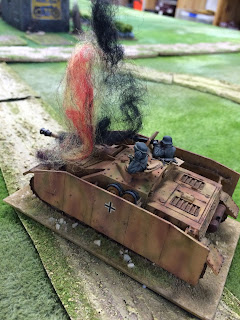 The rest was simple: the British took the line of houses in front of our line of defense, concentrated the fire in each and then used a flamethrower. When the defenders were soft enough launched an assault. 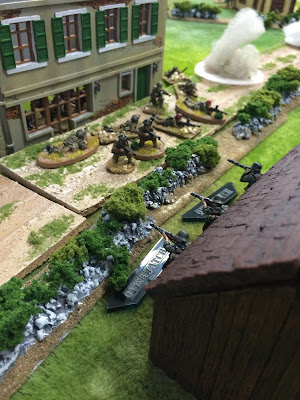 By this time our moral level was already dangerously low due to loss of team, leaders and supports. Hence, despite wiping out the attacking unit, the remnants of our section fell to the last man (including a junior and senior leader), hitting hard on our Force Moral roster, falling to… zero. 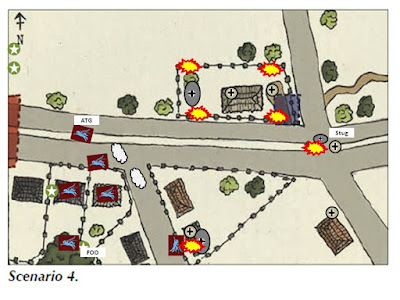 Set and match point! The British had conquered the last critical lap of the road and the way is now open to reach the bridge in force.

A short but quite intense campaign, highly enjoyable and recommendable. The elite status of the Red Devils despite being outnumbered in men and material makes these troops surprisingly resilient and hard to beat.

Plans for the following weeks involved travelling to the Low Countries in two weeks to attend Crisis in Antwerp and then off to visit Arnhem itself (...also Waterloo and Bastogne) in a 5-day tour. Once we are back, we will start playing the recently published pint-sized campaign supplement “Operation Martlet “, a campaign that will likely extend until Christmas at least.

Then it will time to plan the 2016 projects. Nothing being discussed at this stage, but the Eastern Front seems like a strong candidate at the starting of the New Year.