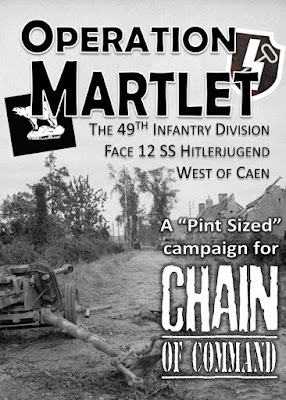 Operation Martlet was published this week, a new 28 pages campaign supplement for Chain of Command in the "Pint-Size" campaign series. This operation is the prequel to the better known Operation Epsom in Normandy (June 1944) and involved the British 49th Infantry Division and elements of the German Hitlerjugend Division. The supplement will last between 6 and 11 games and contains the maps, army lists and support necessary to play.

As usual, the booklet includes lots of interesting historical stuff to put in context your games. The unrivalled cost (GBP3.6) is the cost of a pint of beer in the pub frequently visited by Richard Clarke in his home town St Albans... a shame he does not live in Spain, where beer is significantly cheaper.