This is the thrid entry of my Chain of Command Diary, a series of posts commenting my impressions while testing the incoming II WW skirmish rules to be published by TooFatLardies in the summer of 2013.

Topic of today: Command & Control...or how the TFL boss caused panic among the Lard retinue
Those familiar with TFL games know that one of the most distinctive features of their systems is the use of card-driven activation to govern the games, replacing the more traditional turn-based and IGYG systems.

Cards activate commanders and units, and the card deck composition is key to simulate different national characteristics or specific scenario situations of the forces involved: for example, a "MG bonus card" allows a high quality support weapon crew to fire twice or a "Blitzkrieg" card enables a German panzer commander to exploit a gap in the enemy line  by moving twice in the same phase.

Not suitable to all wargamers tastes, underpinning this system is the idea of recreating battle friction and fog of war: while not making the whole game unpredictible or denying the control of the forces or the implementation of the battle plan, card decks introduce an element of uncertainty and forces the player to chose between different tactical options at each time.

Well... Chain of Command actually may mean the end of the TFL card-era games (...yes you read it right...);  and even worse, Richard Clarke has introduced TURNS in the game (...heresy, heresy!!!...)

OK, no need to panic yet. In fact, what  Chain of Command brings is an extremely clever, elegant and efficient evolution of the card system, based on the use of... DICE.

If you had the opportunity to watch some of the excellent game introductory videos, you'd already know what I mean.

In brief, in the new system, each average force will have 5 "command dice", that could be adjusted to 6 or 4 for above (i.e. paras) and below (i.e. Volkstrum) average forces respectively. The phasing player will roll his command dice and the results will allow him to undertake different actions: 1 to activate or deploy at a jump-point a fire team; 2 idem but a full section/squad; 3 a junior leader (NCO); and 4 a senior leader (Officer) (I'll leave 5 and 6 for later). 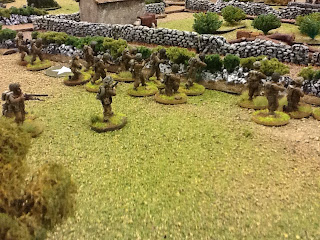 Support weapons (HMGs, infantry or AT guns, etc) are considered "teams" for activation purposes, therefore they activate with a "1". AFVs are activated with the type of  leader commanding the vehicle (3, or less frequently 4).

To eanble further optionality, the player is allowed to combine the results of any two dice to achieve a higher number, if it is advantegeous to his tactical plans (for example: a 3 and a 1 into a 4 to activate the Senior commanding officer).

Once activated, units can move, fire, take cover or recover shocks; or a combination of some of the above. Active leaders perform different actions on their own (move, get attached to units, etc),  can order (= activate) units under command to perform some of the tasks listed above, recover shocks, or order units to go on overwatch, etc. The same applies to leaders commanding vehicles. 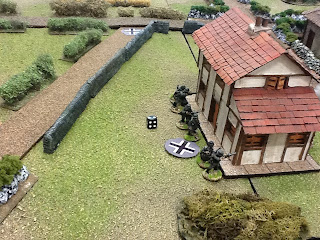 As you may have already concluded, dice or cards serve to the same purpose (introducing uncertainty); but my experience while testing CoC is that the dice system increases the optionality of the player significantly... I would even say that I "suffered" this optionality, because it forced me to assess many different options in a short time span... or in other words, and considering also the scale of the game, with CoC the designer is offering a very close simulaton of the front-line leader battle experience in the field.

What about the 5 and 6?. Well, 5 is used to accumulate "Chain of Command" points. For every 6 points, the player receives what we can call as a "Chain of Command"  bonus. The bonus offers the owner additional game options, like the possibility of ambushing enemy forces, moving one jumping points to a more advantegeous position, avoid a moral test or interrupt the enemy phase.

The "6" governs the following game phase. Achieving one 6 means that the initiative in the following phase shifts to the opposing player; with two 6s, the initiative remains with the current player (having an impact in your current and following phase planning!). Three 6s means the last phase of this turn* (turn = a significant break in the battle development). And achieving four 6s not only ends the current turn but also triggers a random effect roll (not necesarily positive to neither player!). 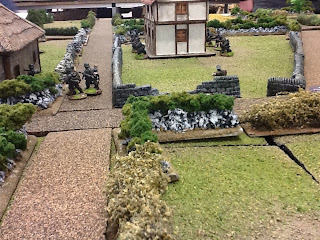 After this description, I hope to have dispelled any preconception that Chain of Command is similar to Bolt Action just because both use dice for activation... nothing farther from the truth; personally (let me remark the word personally), after playing a couple of Bolt Action games, I decided not to continue with it as I found too much randomness in their system.

And please, I'm not meaning or saying whether that's good or bad, better or worse. Warlord is for me a remarkable example of entrepreneurial success in the wargaming industry, Bolt Action has a legion of fans (some in my club in Madrid) and I respect each individual's decision. But to may gaming style and tastes, CoC will be my preferred rules set to play II WW skirmish actions.

------------------------
In conclusion, Chain of Command is above all a comprehensive and realistic simulation of the tactical options faced by a squad leader in a II WW battlefield. Despite the changes to the traditional command and activation mechanisms, the two key NDA features  (friction and historical simulation) of the TooFatLardies factory remain solidly embedded in this new wargaming venture.

*Turns are made of an unkown number of phases, as the conclusion of a turn is driven by achieveing three or four 6s in a Command Dice throw. The meaining of "Turn" in CoC is different to other games, it only reflects a significant break in the battle development and fighting conditions, materialised in aspects like loss of tactical cover by units, end of smoke screens or impact of random events.