Last Chain of Command game of this season (and probably until the rules are finally released on 21st August), as most of my gaming mates will start their holidays from next week onwards. I chose the "Lehr Recon" scenario from the "Heroes of Omaha and Panzer Lehr" Skirmish Campaigns book.

It involved a halftrack mounted platoon attack in July 1944 to some elements of  of the US 9th Infantry division in the rearguard line. The latter are in fact a hastily collected melange of clerk and security units with a bazooka tem and an MMG as all support, of green quality, but that I decided to leave as standard moral. Quite unbalanaced at first glace and, as expected, they were totally overrun buy the veteran Germans in a few turns.

The first conundrum we faced was that because the Germans start mounted, they cannot use jumpoff points but will arrive from the table edge (see th explanation in my Chain of Command Diary # 4 post). But we still needed the patrol phase to fix the US line of defence. So finally we decided to undertake the patrol phase despite being of no use to the Germans. 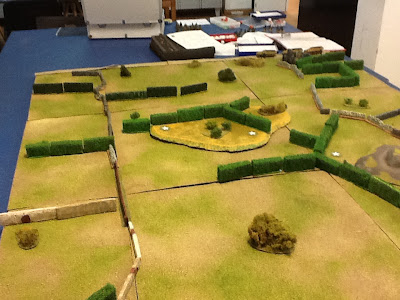 We played in a 6" x 5" table, as illsutrated in the previous photo (view from the US side; the German entry point is a road running along the edge of the table). The hill on the center is the main objective of the German's victory conditions.

The halftrack arrive in the first phase of the game and made a raced towards the objective. In the US first turn I deployed the MMG but was basically ineffective against the Hanomags (note: need to clarify how many AP dice MMG have..)  An isolated German haltrack advancing ahead of the rest was ambushed by the bazooka team... 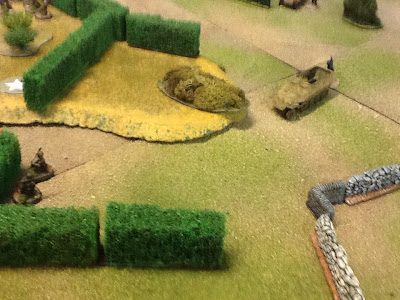 ... but a very bad dice throw made limited impact on the crew. Only when a US infantry section attacked in close assault, the halftrack was destriyed, but not before causing severe caualties to the Americans, that were wiped out.

Using the cover of bocage, the dismounted German sections got enough close to the remaining US units defending the hill... 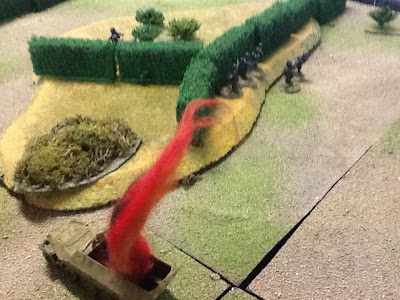 ... being destroyed at close quarters and ending any effective resistance of the Americans. Complete and decisive victory for the Germans, in undisputed control of the objective 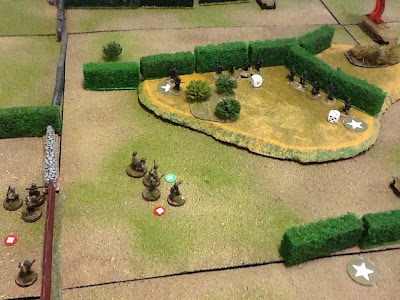 A  quick game, taking not even 2 hours (including coffe break!). I think this scenario needs some changes (and the German player also agrees). Probably at least one additional bazooka team and/or offboard mortar support.

And I'd also change the map layout:  no LOS is allowed across hedges, but there was hardly any place to get some cover in the table and I only could fire the Hanomags from a totaly exposed position; the first fire works, but then my units were subject to the fire of the German LMGs on top of the Hanoimags and could resist a couple of activations at best.

I need also to clarify the rules gobverning infantry close assaults on the vehicles. This morning we allowed the whole crew to defend, to use the LMGs and in addition, to get benefits from the armour of the halftrack ...with the expected result as described above (the Hanomag destroyed but the US squad wiped out too).