They Shall Not Pass - The British at the Jarama Valley 1937 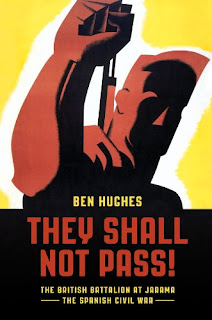 I have just finished this little but otherwise excellent work about the British Battalion involvement in the Jarama Battle during the winter of 1937, part of the XV International Brigade. Trailing the style and structure of Ambrose's Band of Brothers, the writer has identified the main characters, providing their background, key aspects during the battle and the aftermath using primary and secondary sources.

The description of the climatic points of this short (12 to 15 February 1937) but bloody battle to save Madrid from being surrounded by the Nationalists troops is dramatic and well structured, supported by ample notes and the best thing of all, detailed map illustrations that makes the narrative really easy to follow.

The toll in terms of blood of the British was terrible, facing overwhelming odds against the well trained Nationalists troops (the professionals of the Spanish Foreign Legion and the mercenary Moroccan Regulars) and suffering from inexperienced commanders, driven more by political considerations than pure military aspects. Out of the 500 British and other regions of the Empire, 300 were causalties of which 150 dead or MIA.

All in all a very engaging reading for both history aficionados and wargamers, wuith plenty of materials to replay the battle either with IABSM  and possibly Chain of Command  (already working to adapt CoC to the SCW!!).... and a real bargain, priced at US$5 at Amazon's Kindle shop.
Publicado por Anibal Invictus en 19:35