Blazing our way in! - A Chain of Command Battle Report 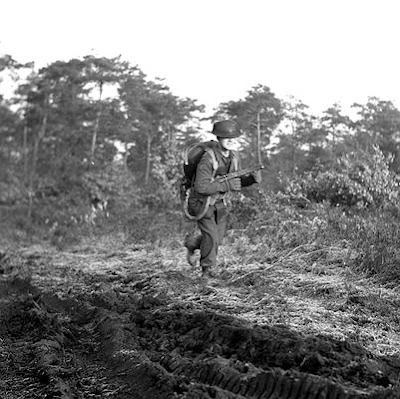 We played the third game of our mini-campaign in Normandy with Chain of Command. As I mentioned in my previous post, this campaign was unintended, as I realised that it was easy to link the events of the first two games into a structured and cohesive narrative.

The story unfolded as follows: after successfully breaking from the beachhead on D-Day, Lt Lozano (commanding a platoon of regular British infantry) established an advanced position in the small hamlet of Gruyere-sur-Mere in a key cross-road. In our first game, a German counterattack with a hastily made kampfguppe of different infantry units failed to eject the invaders and the German commander decided to pull out and move to a new defensive line.

Encouraged by the success in repelling the Germans, the British sent an advanced party to test the location and configuration of the German defensive positions. Unluckily they bumped head to head with a recon enemy force with the mission to seal the gap in the lines. A ferocious battle in the bocage developed, with tragic consequences for the British, who lost half of the force and broke in panic.

In the game today, Lt Lozano was given the task to penetrate the German defences after intelligence reports indicated a weak spot in the lines. In this case we used Scenario 2 “The Probe” in which the attacker must place at least one team   in the defender’s base line. This base line comprises an area 12” wide and the table side long (see maps below).


Each side has a base force comprising a full infantry platoon plus reinforcements. As usual, a D6 is rolled to set the support level, resulting in a 5 for the British and 2 for the Germans (half the British level rounded down). I chose from the German list a second senior leader (helpful to reinforce the command structure on the table, directing fore and reducing shock) while my colleague in front went for a flamethrower team plus a pre-game barrage; the latter was a good choice as it does not kill units but significantly disrupts the arrival of your forces to the table. Force morale rolls were made resulting in 8 for the Germans and 10 for the British.

The scenario also had some special rules for the patrol phase: the defender must deploy first his patrol markers with the usual restrictions (all four interlinked and not more than 12” away from each other). The attacker has the choice to enter with the patrol markers at one point in any place of its base line.
I extended my four patrol markers aiming to cover as much terrain as possible, which after the game I realised it was not a smart decision. The British player attacked form the left of its line (south of the table) and when he started to move is when I discovered that I’ve made a blunder with my initial deployment: as all markers must be interconnected and separated no more than 12”, the marker in my right was basically locked!   I had to move all the line from the extreme left to provide some mobility to the marker on the right!!
As a result, the British player was free to move at leisure and get really close to my base line; and the only option I had was to create a dense jump-off area and counterattack to push any British unit from my base line. 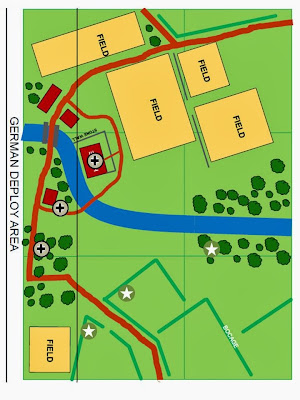 To be honest, if we were to read the victory conditions literally, the game was lost in the same moment the first British unit emerged on the table, as it came out in my base line. So we decided to continue and declare the victor based on whose side was to break first because of reduced force morale. The final disposition of the patrol markers can be seen in the map below. 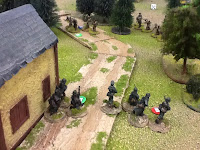 The first two British units were deployed and moved at the double towards the German main area. I could just deployed one infantry section in my phase as the barrage was interfering in my rear and slowing down the arrival of units. I splitted the section into the LMG (in the house with the junior leader) and the rifle team ahead under cover of the trees with the idea of catching first the British moving forward. 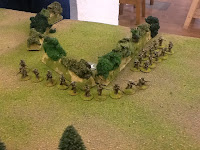 Unfortunately, a good dice roll allowed the British to take 2 consecutive phases and close assault my poor rifle team (note to myself: remember you have the option to put a unit in overwatch!!!) being completely wiped out in the exchange. The Germans under shock, saw their force morale level reduced by 2. 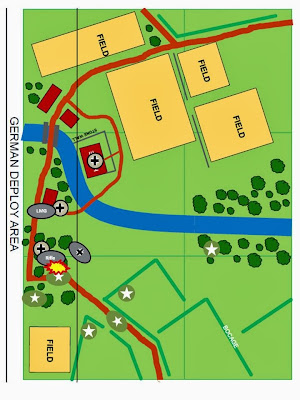 However the LMG and a new infantry section arriving on the table took revenge, firing at point-blank distance at the attacking British, pinning them first and routing after a new activation. 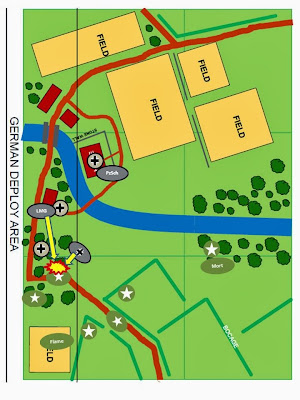 The situation was more balanced now...or so I thought!  A second British infantry unit emerged from the woods and advanced forward to meet my last infantry section, now finally reaching the table (dammed interdiction artillery fire!). The exchange of fire was net negative for the Germans, losing the junior leader and 2 additional morale points (now at 4!) 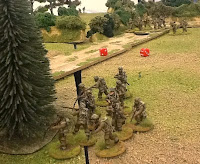 But the worst was yet to come: from the ranks of the British line a flame of fire directed to the house eliminated the HMG team and the commander attached to it, while a mortar made an additional casualty on the much depleted ranks of the infantry section. After rolling again for moral, the level was now at a meagre 2. 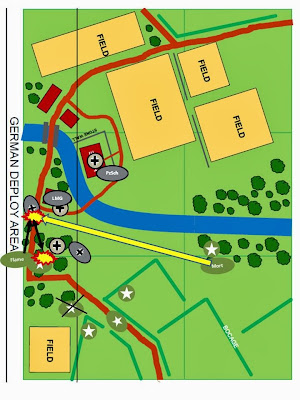 With the moral at such a low level (limiting my command dice to just 2) I conceded defeat and declare a British victory. 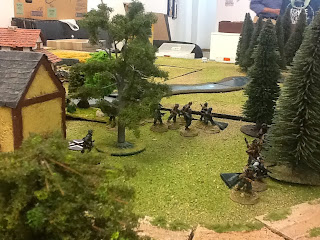 This morning’s game was fast, lasting just over 2 hours and a half. The patrol phase seems increasingly the more important aspect to plan in advanced, as truly the whole game later pivots around what you have achieved with your patrol markers.

I enjoyed a lot the game today as I’ve been doing since I started testing the rules back in March;  but another aspect that improves my gaming experience is the continuous discovery of new twists and possibilities every new game I play with Chain of Command.
Looking now forward to a writing a new chapter in our campaign, hopefully next weekend!
Publicado por Anibal Invictus en 23:25