Closing with the Enemy: Book review 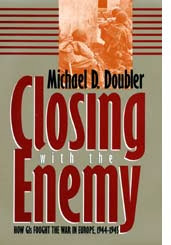 Michael Doubler: Closing With the Enemy: How Gis Fought the War in Europe 1941-45, University Press of Kansas (1994)

I got interested in this book after reading a review in one of the blogs I regularly follow (unfortunately cannot remember who did it: if you happen to read this, please stand up to give you the full credit).
As it can be inferred from the title, this book deals with the tactical approach of the US Army in the European campaign, mostly focused  around the battalion and company organisational levels, although making frequent deep dives into smaller unit actions.

The author attempts to dispel  the popular belief that US won the war thanks to overwhelming material and human resource, fighting along the lines provided by the field manuals and allergic to introduce any tactical innovation in the way of conducting the operations.

“Totally the opposite” writes Col. Michael Doubler. He founds an army that tore into pieces the tactical notions learnt in the training camp as soon as the first GI put his feet in North Africa, marking the beginning of its involvement in the European Theatre of Operations (ETO). He also describes an army not only geared to innovation as requested by the tactical situation at each moment, but who also spread the tactical lessons learned with gusto and high efficiency across all levels of the army organisation, having produced in the 10 months running to VE day a staggering 1.500 documents of tactical value.


To take on this task, Doubler´s book runs along 350+ pages (a manageable size) including close to 50 pages of notes and bibliographical sources supporting his thesis. The book is divided in 10 main chapters and 2 Appendixes, dealing with the performance under the different tactical conditions faced by the US Army in Europe, which coincidentally conform a chronology of the European campaign:

Did the author make a good work? Affirmative, although I'm still struggling to accept the thesis in full. He clearly shows an army and the commanders flexible enough to change tactics and reorganise the assets available in the most efficient way to deal with the different and changing tactical challenges.


However, this is difficult to reconcile with the (sad) fact that US units operating in Europe suffered turnaround rates close to 100%, therefore the learning had a high cost in blood for a generation of young Americans, a fact I think we tend to forget in Europe more often than not. The difficult question to answer is whether the death toll would have been even higher should the army have taken a more conservative approach to tactical innovation.

But my conclusion is that this book really merits investing your reading time if you are a military history aficionado. And has plus benefits if you are a wargamer, as the text in almost all chapters provides interesting and inspirational materials to design small scale scenarios in the different combat environments (urban, bocage, river assault...) described.