Where Victoria and Iron Crosses Grow: A Chain of Command Report 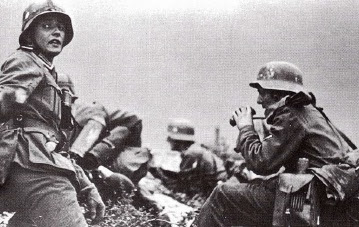 Today, the British forces dealt a decisive blow on the enemy, storming a main position of the defensive lines and sending armoured troops through the gap to the rear of the enemy. Both, the lack of depth in the defence and the exhaust affecting the Germans after so many days of combat, contributed to crumble the moral of the enemy forces and the ensuing panic followed.

So it ends our fourth game, and to all effects the mini-campaign fought in Normandy over the past few weeks with Chain of Command. Recaping:

First game:  breaking from the beach area, the British established a forward position at Gruyere-sur-Mere (a key cross road directing inland Brittany) that survived a ferocious counterattack of the Germans.

Second game: the British detached a platoon in scouting role to test and gather intelligence about the configuration of the following line of defence held by the Germans. Unfortunately it bumped with another German group looking to seal the gap created after the failed counterattack. In the ensuing battle, and with the odds clearly against the British in unknown bocage country, the British backed with heavy losses.

Third game: the British intelligence informed about a weak spot in the German lines following an intensive aerial reconnaissance effort. A British platoon is sent to take the outer posts of the line with the aim of a creating a base for the main attack, a mission they successfully accomplished.

Today the main attack was launched on the German positions and, as we already commented, resulted in a victory for the British. The Germans nonetheless fought tooth and nails and during the battle several valiant officers and NCOs of both sides fell including the German senior leader while directing the fire of a section LMG.


The game was based on Scenario 3 “Attack-Defend” of the Chain of Command book. The objective is to force one side to leave the table due to moral erosion while maintaining its own side at 3 morale level or more.

The map below show the lay-out of the gaming table, with the main defensive position held by the Germans around the cross road in the small hamlet located in the north-east quarter of the table.

Each side commanded an infantry platoon-size force plus some support assets. The support dice roll was 7 for the British and 3 for the Germans (half the British number rounded down). The 7 gave the British a wide range of options including many armoured options that (I rightly guessed) was probably the most attractive.

Unfortunately, the German 3 support level was not enough point to acquire an AT gun, so I finally decided to buy a mine field and 2 sections of wire, creating a powerful stronghold within the perimeter of the hamlet. 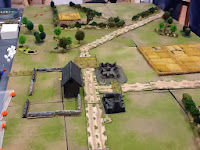 Once the moral was rolled (10 German and 9 British) the patrol phase started. Lesson learned from the previous game, I concentrated my patrol markers to enjoy more flexibility in how to move them. And it worked... I locked the British patrol markets not far from its tactical edge (south of the table) and had to deploy the jump-off points substantially to the rear of its line. Mine were all deployed in the hamlet; as stated in the rules book, I then placed my support assets: the minefield blocking the main road and the 2 wire sections protecting the flanks of my defensive perimeter. 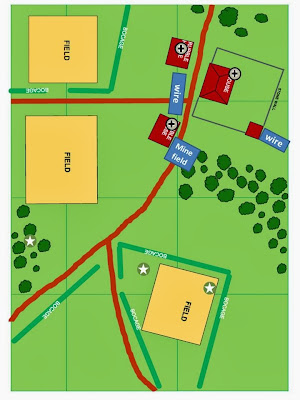 In the first activation the British deployed one section in the woods on the left of its line. I passed my turn to earn some time aiming to check the configuration of the forces and the line of attack. 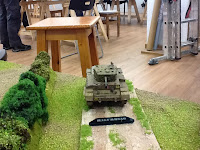 After a couple of activation phases it was pretty clear the road was the main axis of attack. My first section was deployed in the ruined building and an exchange of fire followed against the British in the forests. A second section was then deployed in the main building; having two floors it could fire over the other German unit. 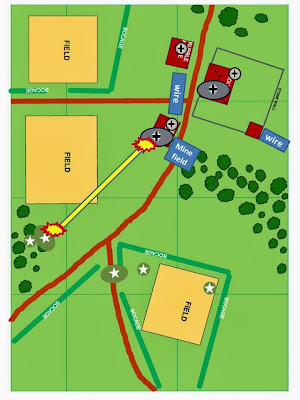 A second British section moved in jumps (tactical move) towards my line) covered by the fire from the other section. After several activations it was finally put out of action, with the junior leader wounded and not able to reduce shocks enough fast. 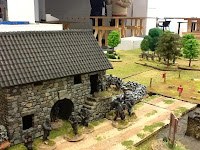 Broke, routed and took shelter behind the forest out of sight from the German LMG gunners (a pity as I could have wiped it out and affected the moral of the British force). In any case, the wounded NCO and the broken unit reduced the British morale by 3 points in total. 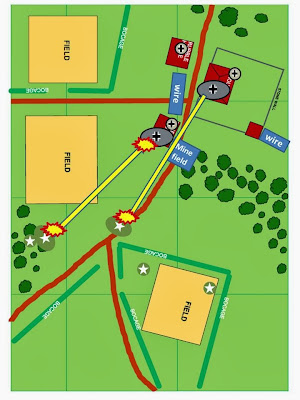 A third British section emerged and tried to outflank my lines through my left side. Also a Cromwell tank was brought into play and started shelling the main house with its gun. When the British infantry section exited the wood in front of the stone wall surrounding the house, my third squad was put into action and fired point blank into the British, who had to pull back with significant shocks and casualties and the NCO wounded, losing another 2 points of morale. Great! With the British at 4 they lose one command die!! 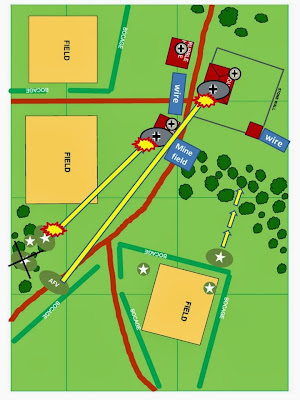 However in the other part of the table, the tank and the British infantry continued pounding the houses and at that moment things started to go all wrong for the Germans. First the senior leader (attached to the LMG in the main house) was killed; this was followed by the NCO in the ruined building being also wounded in the exchange of fire; a few minutes later, an accurate HE shell killed most of the occupants and the survivors broke and flee. 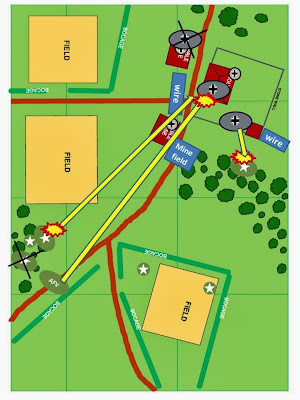 After all these events and some nasty dice rolls, I saw my force moral falling by 50% (##@m British!) to a mere 5. In the meantime the British had brought one of the senior leaders to the table and was attached to the section in the forest on the left. 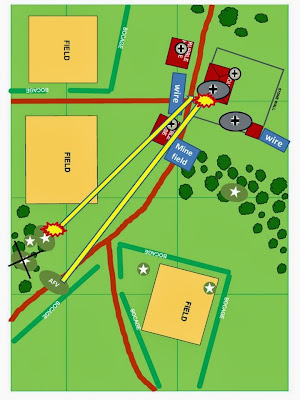 Fire now concentrated on the section in the main house and slowly saw its manpower reduced while shocks accumulated until it finally broke. At that moment the British player used its Chain of Command dice to finish the turn meaning that my two broken units were considered routed without possibility of recovery. A series of additional moral die rolls put my force morale level to 1: game finished and final victory to the British. 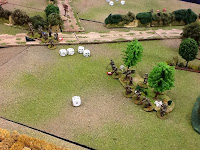 The British victory is firstly the merit of the players, but I made a couple of mistakes that contributed to it: first was fogetting to force ending the turn with a Chain of Command die when the first British unit broke; it would have force the the player to make an additiaonl morale roll.

The second was to leave in overwatch my third infantry section behind the stone wall, I should have at least putthe LMG team in an angle to fire the other British section, adding some important firepower. Being idle for most the game was a major mistake on my part.

Independently, the lack of long range AT fire assets was a major weakness, as the Cronwell could fire at pleasure into my units with 6 HE points while my units had nothing to throw at it. And the British knowing that I could only put a AT killer team in place, did not dare (wisely) to get too close to myu lines.

I have enjoyed a lot both the game this mroning and the campaign as a whole. The players involved in the games have been able to test the different parts of the rules and to get acquainted with the key mechanisms which will be extremely useful when we put the ball rolling with the North Africa campaign scheduled for next February.
Publicado por Anibal Invictus en 23:53