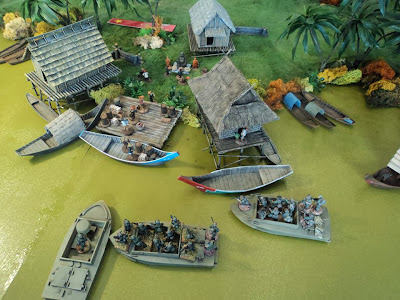 What a wonderful way to end my year of wargaming! I was invited by the owners (...and good friends too) of Barrage Miniatures to umpire a riverine game in Vietnam with Charlie Don't Surf and had the privilege to preview the new US 28mm transport boats to be released for sale in a few days.

We used the advanced riverine rules published in the 2011 Summer Special, that I did not have the opportunity to play before because of lack of materials, and one of the specific scenarios included in the same publication.  I must say that the advanced rules are really good and I only regret not having played before one of these games

The small delta fishing hamlet is being transformed in a key VC base-depot where food and weapons were stored for the incoming offensive. In the meantime, the US command had decided to launch a combined arms operation aiming to preempt the enemy attack and to destroy their offensive capacity.


Unknown to the Free World Forces, the battle area was strongly defended with bunkers, fortifications and large AA assets controlling the potential zones of landing. However, the FWF players decided to act with caution and send a the boats ahead to scout the area and try to assess the enemy’s strength.

The first boat emerged from the south… 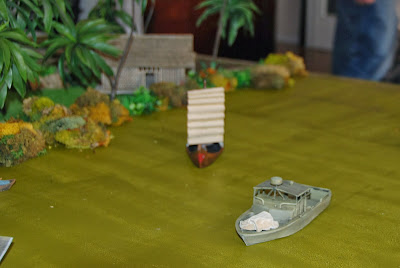 … and in a short time a rocket comes out from the river bank, which luckily causes no harm to the boat or the crew. The first platoon receives orders to neutralise the Charlie team and moves to disembark supported by a gunboat. The VC reacts late and the RPG team is dealt with the powerful HMG fire of the gun boat, knocking ot down. 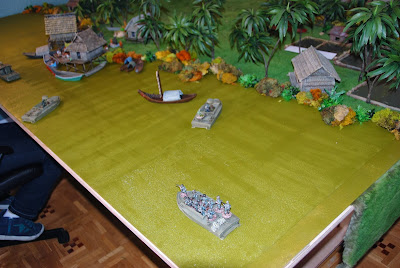 The first transport hit the bank and the platoon commander ordered to jumping off the boat and starting searching for more enemy forces... 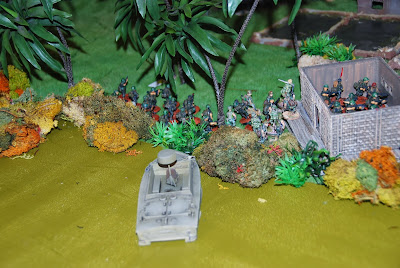 ... and in the ensuing fire melee are quickly put out of action, killing many and routing the rest with the mighty fire of the well armed US platoon squads (5 dice) and the HMGs of the support boat. 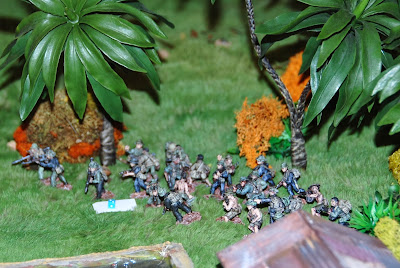 In the meantime a second US platoon is sent to secure the main port area ... 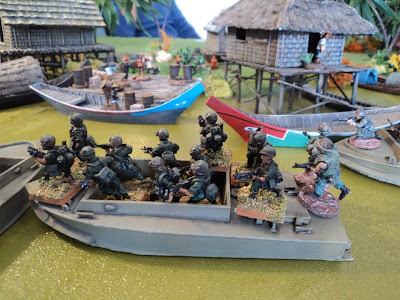 ... but going too harsh in a rush could mean problems as a full VC platoon is hidden in the area. Unfortunately for the VC player the ambush could not be triggered in time and their forces had to emerge from blinds. Although firing first and killing several US soldiers, as in the case of the other enagement the super-fire-power of the Americans is overwhelming breaking the VC ranks who flee to the jungle behind

This basically ended the game: with the main port area secured, the military victory was for the FWF; and it was just time before they would discover the caches of rice and weapons, likely achieving the secondary objective too. 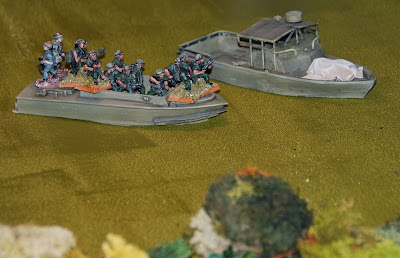 The US player attempted to bring the gunship helicopters but failed to contact the base and (wsely) did not dare to bring the rangers slick without protection. In the battlefield lied the corpses of at least a dozen VC killed granting enough intelligence points to win the political victory too.

My take on the game: this a complex and large-sized scenario. It probably required more experienced players, specially in the dark arts of the VC management... and I put as American commander people that usuallu plays VC. Also, the last minute addition (distributed yesterday evening) of the advance riverine rules did not help at all... my fault.

On the positive side, we could test in depth the riverine rules and I must say that are excellent and I recommend with gusto to anyone familiar with CDS. It will be worth continue working on them and perhaps training ourselves with more limited scenarios before attempting to play such a large scenario as the one today... and by the way, not always have the be the Americans waterborne... 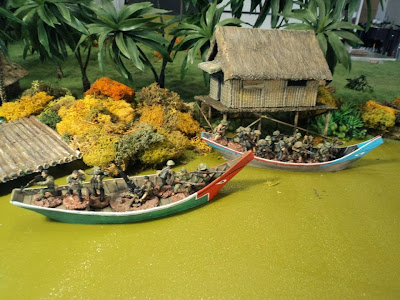 Final note: thanks to Clara and Alf (the brains behind Barrage Miniatures) for their invitation to play at home on a Sunday morning ... and for the gargantuan food & drinks buffet served during the game; and to my pals of Club Dragón for coming to play.