Probing the Enemy Lines - A Chain of Command Report 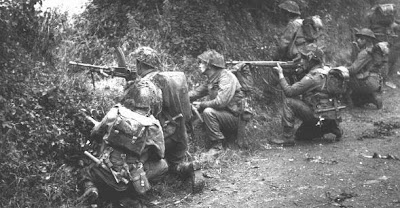 Following the success defence of Gruyere-sur-Mere and the reject with high casualties of the German counterattack, Lt. Lozano was ordered to move forward and probe where the new enemy lines were established.

Today we played a second game of Chain of Command confronting British and German forces in Normandy. For this second stage of what unintentionally is emerging as a mini-campaign, we chose the “Patrol Scenario” of the book. In this scenario, two enemy forces advance towards the no man’s land with the intention of conquering the area in preparation for a follow-on attack.

According to the scenario instructions, each side has a base force (a 3-squads infantry platoon) and then die a roll to obtain reinforcements. Unfortunately I roll a “1” which allowed both players to buy a very low-level asset. From my list (German) I only saw as minimally useful to attach an adjutant (helps deploying forces on the table) or a medical orderly (to attend wounded leaders). I opted for the former as this would allow me the option to deploy my senior leader early on the table without penalties when attempting to put on play the rest of my force.

With the forces ready and after rolling for morale (both sides were ranked “9”), we started the patrol phase. Again I rolled “1” indicating the area of the map where I would deploy my patrol markers (left of the table) while the British player rolled “2” (centre). My intention was to rapidly advance aiming to build a base position on the two houses at my right.

When the patrol phase concluded the British was in control of the rubble house, but I was within easy reach of the remaining two buildings. In quick sequence I brought my first squad on the table and occupy the house on the left; but when I attempted to move a second squad to enter the one on the right, the British player rolled for two consecutive phases, catching my squad naked in the open, suffering several casualties and shocks. 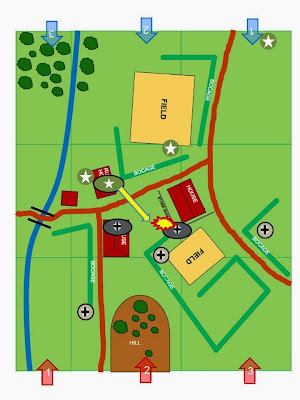 In my own phase I discovered that the house door was actually in the field of fire of the British, so instead of entering the building, I sent the survivors around the house to get some shelter and recover the shocks.  The British platoon mortar was also quite helpful: it failed to put smoke in front of the other house to blind my unit and the shot fell right next to my other squad, who could move at leisure to take shelter behind the house walls.

At this of the game the British were at a clear advantage, with one intact squad on the table in a good firing position to dominate my front and two in reserve off-table. The German had one on the table also in good shape and under cover, another off table and the remaining squad severely weaken. 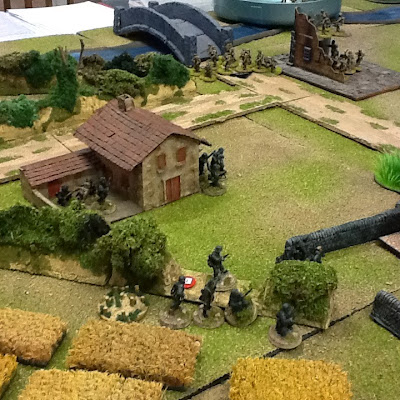 The next phase saw the British player deploying a new squad on its right flank in the corner made by the river and a bocage hedgerow. The intention was clear: cross the field, take my jump-off point and outflank my forces... easy isn´t it? 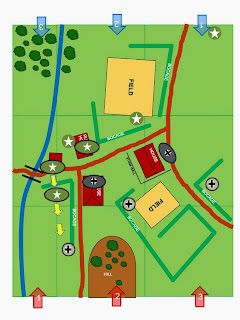 Well not so.... actually the British did cross the bocage line (which took 1 full activation) but in my following phase I got two “6s” in my command roll, meaning that I had two consecutive activations: in the first, I deployed my last squad and fired point-blank on the British, making a few casualties and wounding the squad leader (moral force roll and loss of 1 point); in the following activation I fired again and this time the squad finally broke resistance, causing another force moral roll (loss of 2 points) and the remaining survivors fleeing across the hedge. 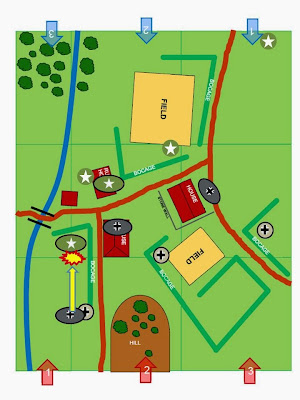 Adding insult to injury, I then used then my Chain of Command dice to finish the turn: if a broken unit does not recover before the end of a turn, then it is considered routed and must leave the battle field. Forcing to take another die roll, the British morale fell now to 4 (from 9 initially) losing 1 command dice for the rest of the game as result! 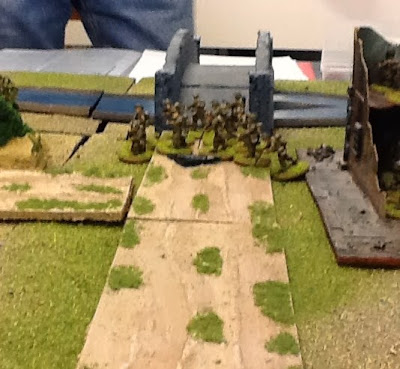 In the final stage of this game, a very disconcerted British player tried now to retake the initiative deploying his last squad and the PIAT team at the jump-off point close to the edge of his entry line. The idea was to fire to my unit sheltering behind the house on my right and eventually breaking and routing. 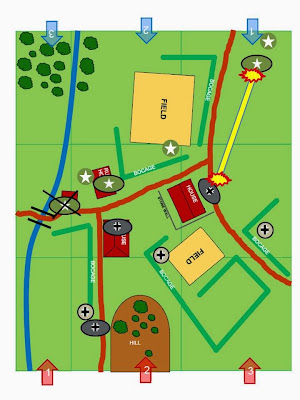 The British fire was not too accurate, totally the opposite than when I returned fire with my LMG, making several casualties and killing the squad leader. After a new morale roll a loss of 2 additional morale levels, the British finally gave up. Victory to the Germans in this second game!

A very dynamic game lasting just over 2 hours (...including "relaxing cup of café con leche") but with shift of fortunes all time. A critical analysis shows that both players made mistakes (in my case, leaving a unit in the open and in potential LOS of an enemy) and that movere and fire is the way to go, instead of freezing in place and wearing out the units in long range fire exchanges.